During the second decennium of FATA MORGANA’s existence, there was one player-change, 133 concerts were played in 7 different countries, a CD was released and the group established itself further in the harmonica world. Also during this period, the quartet members were asked more frequently to act as judge or host at festivals, and the group was asked to play more often at festival gala concerts. 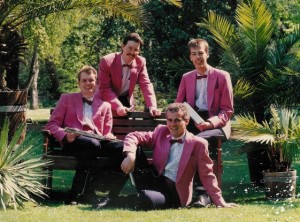 1990
In February, EMC celebrated its 20th anniversary with a reunion and a concert. With 9 pieces, FATA MORGANA played a significant part of that concert. This was also the first concert wearing a new (more sophisticated) outfit. In May there was another SMI Festival in Switzerland: in Uzwil. After a successful concert and a great informal session, one of the group members was almost taken home by an thrilled female fan. That same month at a concert in Gilze, the Netherlands, FATA MORGANA was accused by somebody in the audience of having murdered Glenn Miller when playing Moonlight Serenade. This more than 45 years after Glenn’s passing… In September, Hammie van Hall had organized the Harmonica Party in Nijmegen. Next to blues players and FATA MORGANA, there were several other harmonica styles present, such as flamenco

1991
A busy year. 23 concerts, of which 3 radio performances, 2 TV shows and 6 concerts abroad. In May, FATA MORGANA played at the “Mixed Concert”, together with the pop choir Sway (of which Ronald was the conductor at the time). A good show in the Eindhoven city theatre, good performances of both groups, a special piece played by the band with Rob on Millioniser, and a combined performance of When You Smile: a piece for which the arrangement had been completed only a few days before the show. During the SMI Festival in June in Siebnen, FATA MORGANA played at the Sunday morning informal part. In August a new experience was gained: playing a live radio show between 2 and 3 AM. Quite a surprise when you think that you are expected to play three or four pieces, and 30 minutes before you hear that you’re supposed to fill the complete hour… In October there was the trip to the US for the SPAH/IHO/Hohner Festival in Detroit, Michigan. Five days packed with harmonica. In the group competition, FATA MORGANA was not too pleased with their own performance of The Moldau and the Swing Medley. The Fantastic Harmonica Ensemble from Japan won first prize and FATA MORGANA came in second. After the festival, the group members used the occasion to spend to holiday time in the US. At the end of 1991, the sound equipment was improved, when a new mixing console, a new amplifier and a digital effect unit were purchased.

1992
In March a TV show was planned. Recordings took place on the second floor of the tower of a medieval castle. Although the sound of the new equipment was great, carrying the (> 70kg) rack up the stairs was less fun. But the recordings were fine. In May, FATA MORGANA visited the Mahabri Trio (Maria Wolfsberger, Hans Ortner and Brigitte Laska) in Laakirchen, Austria. Hans had built a bass microphone for Ronald, and picking up the mike was combined with doing a great mutual concert at the Laakirchen Music School. At the SMI festival in Eschenbach, FATA MORGANA again played at the Sunday morning concert.

In June the group made a trip to Paris, France. At Friday night there was a live concert of Charlie McCoy, and Saturday night FATA MORGANA played a short concert in Marne-la-Vallee. In September, the second H.H.H.H. festival took place, including some organizational support delivered by FATA MORGANA, next to the performance during the Saturday evening gala concert. At the end of 1992, the two arrangements intended for the 1993 world harmonica championships were completed, so there was plenty of time for rehearsal. 1993
In previous years, the number of concerts had always been at least 18. In 1993, there were only 12. Including two interesting concerts abroad: in May, FATA MORGANA played at the SMI festival in Interlaken. At that time, Rob and Heike spent their honeymoon in Switzerland, and this was combined with visiting the Swiss harmonica event, well organized as always. In September, the world harmonica championships were held in Trossingen. After missing first prize in Detroit, FATA MORGANA was eager to go for the title. But unfortunately the jury found that FATA MORGANA’s arrangement of the Allegro from Vivaldi’s L’ Estro Armonico was lacking an important part. Therefore FATA MORGANA came in second. At the same championship in the trio competiton, Trio Mendes made first prize with their trio arrangement of Beethoven’s Fifth Symphony. Guess how many parts were missing in that arrangement…

1994
Although in 1994 the group played only 8 concerts, participating in the NHL Spring Hoolie in Bournemouth, UK, was a very pleasant experience. The group met old and new harmonica friends, and gave a good performance at the evening concert in Hotel Laguna. The second concert that year outside the Netherlands was in May at the SMI festival in Oberägeri, Switzerland. This time, FATA MORGANA was programmed at the Saturday evening gala concert again. Despite a 10 year old picture of the group in the booklet (with Erik and Arnoud, who had left the group years before) the event was perfectly well organized. In July, local Dutch radio station Radio Oost did a broadcast from the village of Delden, including a performance by FATA MORGANA and also by Dutch pop singer Marco Borsato, who had just released his hitsingle Dromen Zijn Bedrog. To enable recordings for a future CD, a Fostex 8-track reel-to-reel recorder was purchased. Unfortunately Lex decided to leave the group. He would not take part in recording anymore. Despite his decision in December 1994, he stayed on for another few months, to give the others some time to find a new chord player. 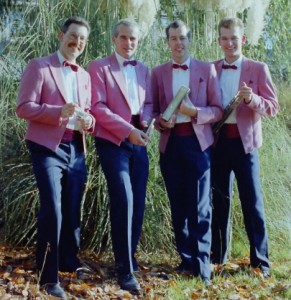 1995
The EMC 25th anniversary concert was the last FATA MORGANA performance with Lex playing chords. His successor (again) came from the EMC orchestra.

The German harmonica organization DHV decided in 1995 to release a harmonica CD with recordings by various players. FATA MORGANA offered to act as a mobile studio. In the end, 6 out of 18 pieces on the CD were recorded and mastered by FATA MORGANA, including an arrangement of Here’s A Rainy Day, arranged by Pete Pedersen and played by Ronald, Dirk and Rob, together with the Blizza Harmonica Gang. The piece was performed live by this ad-hoc group twice: at the harmonica festivals in Rothrist, Switzerland, and Hilden, Germany. During 1995 a lot of time was spent recording pieces for the CD that was to be released in 1996. Rob played most of the chords on this CD. The year 1995 ended with a concert in Gummersbach, Germany on New Years Eve. The concert lasted quite long, causing a situation where some FATA MORGANA members experienced the change from 1995 into 1996 when they were still driving home. 1996
Planned release date for the new CD was the SMI festival in Zurich, Switzerland in June. However, since the quartet had decided to enter into a license-agreement with Hohner for the CD, Hohner had to produce and release the CD. This caused a delay and the CD was not ready on time for the Swiss festival. Nevertheless the SMI festival was great, with FATA MORGANA playing during the Sunday morning show.

The first performance where the group could also sell the new CD was on July 22 in Amsterdam. The CD was named Way To Your Heart, and the backside over the cover included a comment about FATA MORGANA written by Pete Pedersen. This was a typical Pete Pedersen comment, with humor and positive remarks on the group. Interesting fact is that the piece the CD was named after, Way To Your Heart, was never performed live by FATA MORGANA. In August, the quartet organized a successful informal harmonica session in Valkenswaard, together with various players from the Netherlands and Germany. Since the Hohner Marine Band harmonica existed 100 years, Hohner decided to organize the “European Harp Festival” in Trossingen. Rob was asked to be the chairman of the jury for the competiton part, and FATA MORGANA was invited to play at the Saturday evening gala concert. It was a good show and a fantastic experience to play at the main stage in Trossingen in a concert together with harmonica stars such as Sigmund Groven, Franz Chmel and Larry Adler. 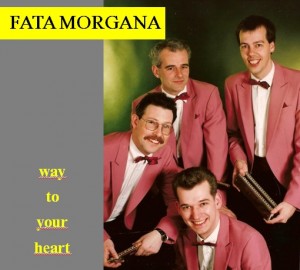 1997
Encountering more obligations regarding professional careers and family, the number of FATA MORGANA concerts per annum had to come down. As in 1996, there were 10 concerts in 1997. There were 4 radio shows, including the last show produced by George Klein. Over a 14 year period, FATA MORGANA had played in 20 radio shows that were produced by George for the EO broadcasting organization. In those 20 shows, the group learned a lot, got loads of free publicity and had a very good time. In September, for the first time in several years, FATA MORGANA was invited to play at the Novam festival in Doetinchem. A nice festival, well organized by harmonica club the Hohner Boys from Gaanderen.

In November, FATA MORGANA played three times at concerts of the Brass Band of the regional police, in Gemert, Veldhoven and Eindhoven [28]. When the quartet played the arrangement of the medley Moment For Morricone together with the brass band, the amplifier had to work extra to balance the volume with that of the >60 brass instruments. 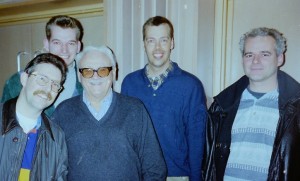 1998
The year 1998 started with something special: two concerts with the 100 piece Philips Symphony Orchestra. At the rehearsals we met Toots Thielemans. The orchestra and FATA MORGANA played four arrangements of movie soundtrack parts. The quartet also played Gipsy Carnival. During the sound check for the second concert, the FATA MORGANA mixing console broke down. By coincidence, this (1) happened on a Saturday afternoon (shops still open), (2) ex-quartet member Lex de Rijck had come along to handle the sound system, and (3) the group had never played a concert closer to the shop of their dealer for sound equipment (only 2 km). They were lucky: within an hour, a replacement mixing console was available and the concert went well.

The new black and yellow outfit was used in April when playing at the 40th wedding anniversary of Ronald’s parents. Later that year, 5 concerts were played outside the Netherlands, including the festival in Bad Oldesloe, Germany, where FATA MORGANA was pleased to play well at the Sunday morning concerts, since their performance on the Saturday evening concert was (by themselves) considered to be less successful. In June, Swiss harmonica league SMI organized its annual festival, this time including an formal concert on Sunday afternoon. Because of his wife’s birthday, Dirk stayed at home and FATA MORGANA experienced its 250th concert with a trio performance.

1999
In April, it was the first time that FATA MORGANA played an arrangement of The Galloping Comedians. They decided to take this piece in the repertoire after the organizer of that concert had claimed that he would only invite FATA MORGANA for their show if this piece was played. Because of the good feedback from the audience, it became a structural part of the show. In June there was another SMI festival, in Zurich. The FATA MORGANA part was planned at the end of the Saturday evening concert, after many successful performances including the Harmonica Quartet Austria. Despite the late starting time (10 minutes before midnight !!) and all the great harmonica music that had been delivered earlier that evening, the show was very well received by the audience. In September, there was a very special trio performance: Ronald, Dirk and Antal played a special version of the Dutch radio show Candlelight, at the party where Rob celebrated getting his CPA diploma. In 1999, a new digital mixing console was purchased, as well as new monitors, a new amplifier and a midi-footswitch, enabling the control of preset sound-settings directly from the stage. Also in this year, recordings started for the CD that was to be released in the year 2000, the group started using their e-mail address and designing the first FATA MORGANA website.