2010
A lot of practicing in January: the first performance was scheduled for the 23rd. It all went well, and also the concert during EMC’s 40th anniversary celebration was fine. In February, the group played at festival “The Accordeon”, at the Deventer city theatre. In March, the performance at the concert of accordion orchestra Accordeanata in Lekkerkerk was really successful. Both the group’s playing and Rob’s announcement (with quite some humor) were received very well and next to selling quite some cd’s there were several enquiries for future concerts (that actually happened).

Although the group hadn’t planned to play again as a trio, for the harmonica festival in Veldhoven, Paul had to cancel due to illness. This became clear one day before the festival, and FATA MORGANA didn’t want to disappoint the organizers (The Veldhoven harmonica club), so they played as a trio. Ronald (bass) and Rob (chords) also played together with Brandon Power. The summer event was the Baltic-Nordic Harmonica Festival in Pärnu, Estonia. After 2002, this was the second time FATA MORGANA attended this festival, and it was as great as it was the first time. Lots of music, appreciation for the young harmonica players in Estonia, a good show and having a good time. Already in 2009 FATA MORGANA had been invited to play at the annual Altmühltaler Harmonica festival in Bavaria, Germany. Because of Paul’s absence at the time, the group decided to not accept the invitation and hope for another opportunity in the future. Fortunately Georg Fanderl, the festival organizer, asked again for the 2010 festival. So in October the group played in Beilngries, Germany, together with Munich harmonica trio Notenkramer. After a performance with accordion orchestra DVS in Wassenaar in November, the year ended with a concert in December at a party where the Veldhoven Harmonica Club (VMV) celebrated it’s 25th anniversary. 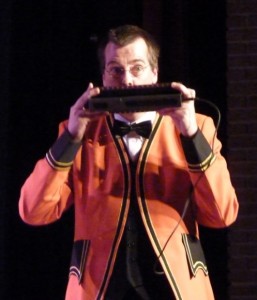 2011
A busy year with many concerts abroad. January activities started at Mansion “De Oliphant” in Rotterdam. A Sunday morning concert with a small but very enthousiastic audience. In april a concert at Accordeon Orchestra Amersfoort. Swiss Harmonica League “Swiss Harpers” organized her annual concert in Rheinfelden in May. The gala concert featured FATA MORGANA as well as the group “Mahapedos”,blues player “Harproli”, trio “Flagranti” and the well known quartet “d’Muulörgeler vo Kriens”. As always in Switzerland: a joy for both players and audience. The new website was published in May. A more modern presentation in comparison to the old website. Hermann Keidel took the initiative for organizing an informal get together in Hohenweiler (Austria) as a surprise party for Moses Post, whose harmonica activities had reduced considerably after the end of the Picca Trio. Together with the “Jovis Trio” (Germany), Harmonica Quartet “Caballeros” (Austria) and “Harmonica Quartet Austria” it became an event that Moses will surely remember. And so will we. Obviously, FATA MORGANA also played at Rob’s 50th birthday party. October showed the second trip to Switzerland: the 7th Oberaargauer Schnoregygefescht in Aarwangen. Organized like Swiss clockwork and an absolute magnificent audience. One week later: the last concert of EMS Bergentheim. Unfortunately the end of a characteristic orchestra that had been part of the Dutch harmonica community for decades. Finally in December: 2 concerts with Accordeon Orchestra “De Vrije Kunst” in Beerse, Belgium.

2012
Again more concerts outside then inside the Netherlands. At the concert of brassband “Juliana” in Waalre, several pieces were played together. Former chord player Lex de Rijk visited the concert: a nice opportunity to have a chat. A few concerts with choirs in Germany, a party at the Velhoven Harmonica Club and then in september a FATA MORGANA concert in Dortmund. The concert in Silenrieux (Belgium) was the first one with the new outfit. An outfit that also triggered a new photo session. 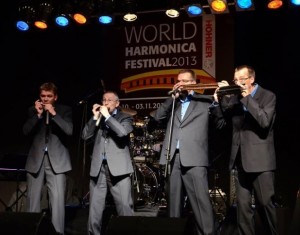 2013
After Grace Tan (our fan from Singapore, living in the Netherlands) visited our second performance in “De Oliphant” in Rotterdam, she recorded our concert in Koedijk on video (as to be seen on youtube). In June, a new set of wireless microphones was purchased. In September, another guest performance in Homécourt (France) and then in October/November the 2013 highlight: The World Harmonica Festival in Trossingen (Germany). A packed event with many old and new friends, 2 workshops, jam sessions and a great concert at Jazzclub Canapé. At the end of November we had a quite weard experience: a concert in Germany where the local host interrupted our performance so often that in the end we played only half of the planned programme.

2014
Only a few perfomances. It wasn’t until May that we entered the stage: “Muziek op de Dommel” (music festival in Eindhoven). In October, Ronald and Rob were invited by the National Harmonica League to conduct 2 bass and chord workshops during the “Harmonica 2014” festival in Bristol. UK. A very nice event, including a renewed acquaintance with Antonio Serrano from Spain. One week later we flew to Italy for a one and a half hour concert in Trento, with a very enthousiastic audience. In December the absolute highlight of 2014: on invitation of Harmonica Ensemble “Sirius”, FATA MORGANA did a workshop and a concert in Taipei (Taiwan). Thank you Sirius for organizing this magnificent event. The video recording is available from our webshop. 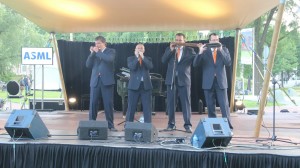