Before FATA MORGANA started: the 1970’s

When the founding members of harmonica quartet FATA MORGANA started the group in 1980, all of them had already gained harmonica experience in the years before.

The roots of the quartet lie with the Eindhoven Harmonica Club (EMC), initiated by Peter Janssen early 1970. This club hosted harmonica orchestras, but also groups, trios and soloists.

Ronald Kamminga
Ronald started playing bass harmonica in the EMC harmonica orchestra from the start in 1970. He also played the bass in trio Kamminga, together with his sister Olga (chromatic) and his brother Erik (chords). In those days, Ronald played organ as accompaniment for EMC members (such as Corinne van der Maat and the future FATA MORGANA-member Dirk Neerhoff) when they performed as soloists. Additionally, he played the piano with the gospel group “The Young Gospel Singers”. 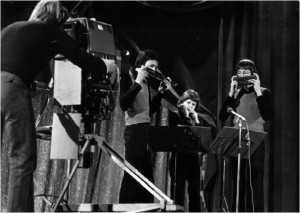 Erik Kamminga
Erik became a member of the EMC orchestra at the beginning of 1970 and played second lead on the chromatic. With the family trio Kamminga (with his sister Olga and his brother Ronald) he also took up the chord harmonica, which he played throughout the 1970’s. Elly van der Walle
Elly also started early 1970 in the EMC orchestra with the “polyphonia”, a three deck harmonica with three-reed chords and bass notes. Later, she switched from this polyphonia to the 24″ chord harmonica. From 1970 until 1972 she also played in trio Van Der Walle, with her sister Anja and her brother Martin (both chromatic). In 1971, Elly became a member of the EMC Quintet, together with Anja and Martin van der Walle (chromatic), Carla Janssen (chromatic) and Rob Janssen (bass). This quintet competed in the group section of harmonica world championships in 1971, 1973 and (as a sextet) in 1975. Having won fourth prize in 1971, they won the champion title in both 1973 and 1975. The EMC Quintet (later named Progress) quit in 1976.

Rob Janssen
Rob learned how to play the bass harmonica with the family trio J.J.J. (Janssen, Janssen, Janssen) together with his sister Carla (chromatic) and his father Peter (chords) in the autumn of 1969. One of the first appearances of this trio was at a gathering that later lead to founding EMC. Rob became a bass player in the EMC orchestra and later also played with (a.o.) Elly van der Walle in the EMC Quintet. He taught himself chords, harmonetta and chromatic harmonica. From 1977 to 1979 he played chromatic and chords in the Phantom trio, with Paul Dikgraaf (chromatic/chords) and Kees van Mazijk (bass). Kees was later replaced by Marjan van der Donk. 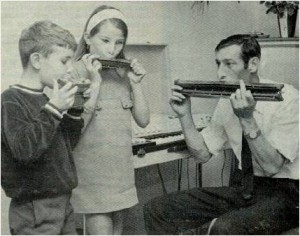 In 1979, EMC only had the orchestra left; the separate acts such as trios, groups or soloists had all come to an end. Ronald, Erik and Rob wanted a bigger challenge than playing in the orchestra only, and they decided to start playing together as a trio. The named themselves EMC trio and started playing interludes at EMC orchestra concerts. Ronald played bass; Erik and Rob played chromatic and chords.